The research leading to these results received funding from the European Community's Seventh Framework Programme
FP7-M-ERA.NET

The primary objective of M2Neural is to improve the long-term stability and reliability of electrode technology for interfacing with peripheral nerves, in order to develop a more effective “human-machine interface” (HMI) for bidirectional neurocontrolled hand prostheses and other types of neuroprostheses dedicated to restoring sensory-motor functions. HMIs are currently the bottleneck for these devices. An improved interface based on advanced multifunctional materials has the potential to revolutionize invasive nerve interfaces, and thus neuroprosthetic technologies. Such technological advancement would provide enormous benefits for people with neurological disorders or amputations. The potential of bidirectional neural interfaces has been recently highlighted by the high-impact results obtained by some of the proponents (S. Raspopovic et al. Restoring natural sensory feedback in real-time bidirectional hand prostheses. Science Translational Medicine. 6, 222ra19, 2014). In addition, it could be also exploited in other health conditions, normally treated by stimulation of the peripheral nervous system (PNS) by using active implantable medical devices (AIMDs), i.e. chronic pain and incontinence. Collectively, the global market for neurostimulation products is expected to reach ~$10 billion in 2015 as a consistent number of people is affected by the mentioned pathologies worldwide.

Spatiotemporal resolution and long-term stability of current PNS interfaces are strongly hampered by the chemical and mechanical mismatches at the electrode surface, between the living part and the artificial system. Chemical functionalization strategies (mainly based on polyimide modification) have been recently proposed, but highly reliable, safe and long-term stable neural implants are still far from being achieved. M2Neural is centered on the development of advanced multifunctional coatings for neural interfaces, able to:

The project will focus on the surface modification of a particular type of electrode used for interfacing the PNS, namely the SELINE electrode (Figure 1), which is commercialized by SMANIA (the SME partner). 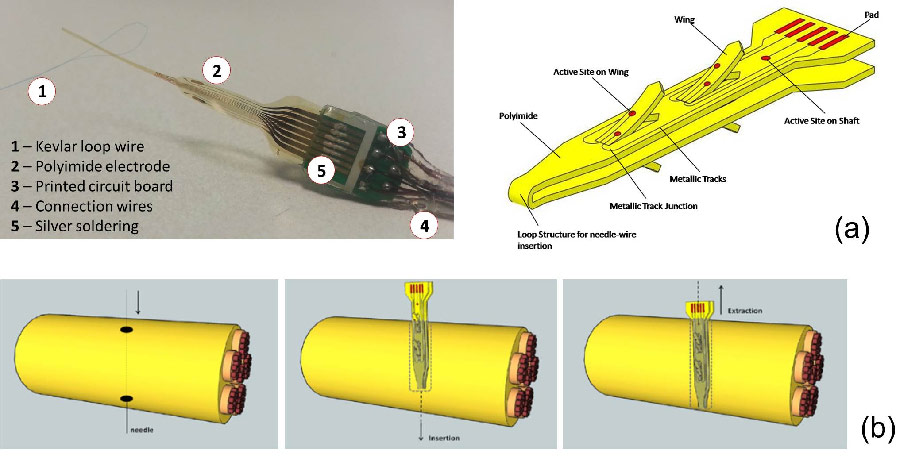 Figure 1: (a) The SELINE electrode and its main components; (b) insertion phases of the electrode in a peripheral nerve: piercing of nerve, electrode insertion and partial extraction, which produces wing opening thus maximizing interfaces areas.

The polyimide surface of SELINE electrodes will be properly functionalized and a hydrogel layer (based on zwitterionic or 2-oxazoline polymers) showing thickness in the micrometer range will be deposited and covalently bound on the electrode surface, after masking the electrode active sites (which need to be free and conductive, in order to interact with the axons). The hydrogel Young’s modulus will mimic the typical one of neural tissue (a few kPa), thus minimizing the mechanical mismatch. Drugs will be gradually released by the hydrogel at the implant site, thus minimizing the formation of scar tissue and promoting neural migration. Piezoelectric nanoparticles, activated by external ultrasound (US) sources, will generate local electrical fields which could trigger or accelerate drug release from the matrix, besides directly stimulating neural tissue.

This procedure will be engineered and optimized throughout the course of the project, with the aim of adapting it to the industrial production pipeline of the involved SME. This approach will dramatically facilitate the final exploitation of project outcomes.

The biocompatibility of the developed nanocomposites and the effects of drug inclusion and indirect physical stimulation will be assessed in vitro, by means of neural-like cell cultures (i.e. PC12 cells). Finally, the interface developed in the project will be tested in vivo by means of experimental implants on rats (which represent reliable models for studies related to PNS). The electrode performance (in terms of quality and selectivity of the acquired signals) for both stimulation and recording tasks will be analyzed over time and compared with existing solutions.